* My camera was prohibited in TD Garden therefore, I apologize for the poor quality of the below photos *

I can cross TD Garden off the arena bucket list.  I have to start by saying this trip wouldn’t have been possible without Her Sports Corner.  Ladies, if you haven’t checked out their website/instagram I strongly suggest you do.  Their website focuses on  all major sports and was created for women and run by women.  I was lucky enough to win a contest they hosted and the prize was 2 tickets to any NHL game of my choice.  After careful consideration I chose to ship up to Boston and check out the Bruins. 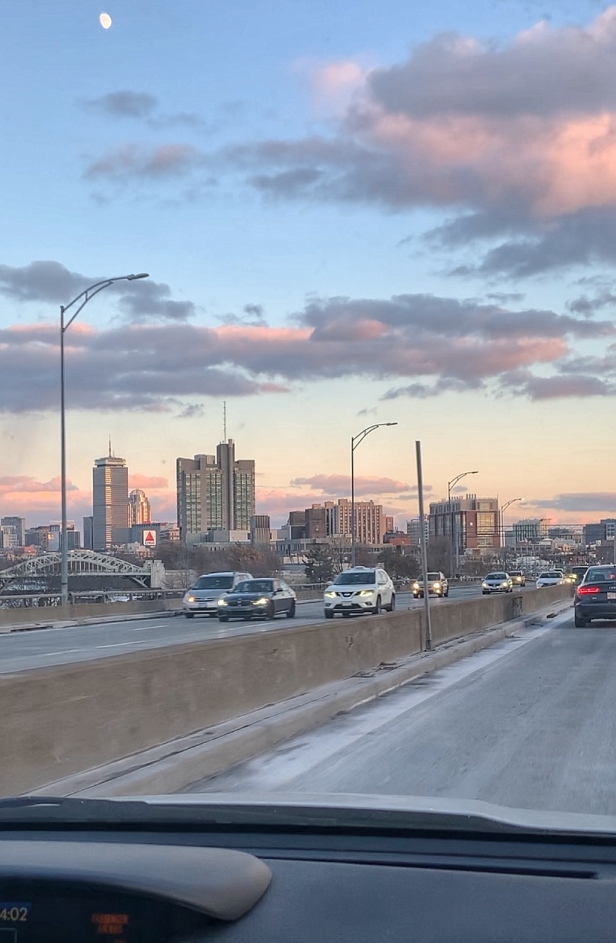 B and I drove into Boston a few hours before the game and it is not as easy to navigate as other cities that I have traveled to.  My GPS was constantly delayed which caused us to miss exits and turns.  Since the ride in was a little chaotic we opted to park at the North Station Garage, which is directly under TD Garden.  While this garage is not cheap ($52.00 to be exact) there is a discount off of parking if you’re a AAA member.  There are other options like the Government Center Garage or Parcel 7 above Hay Market Garage.   Some fans park at the Science Museum for a fraction of the price but you will be walking 15-20 minutes to the arena (not advised if you’re rocking those stilettos). 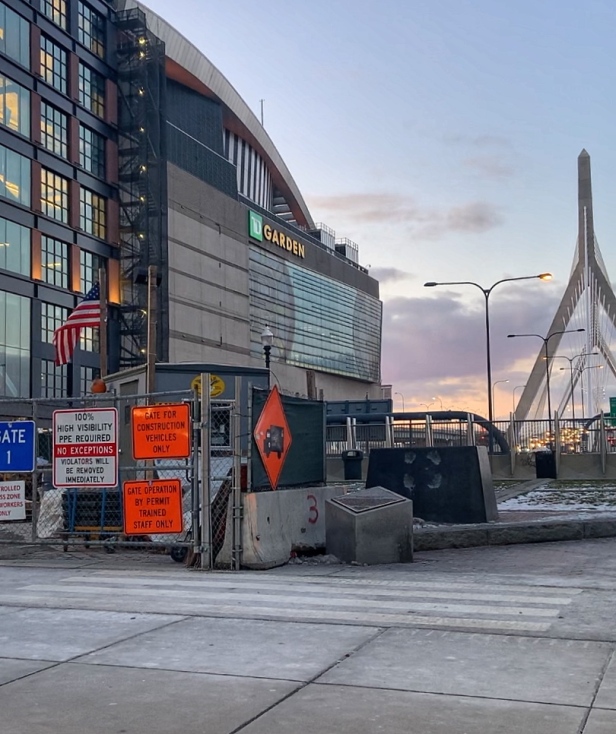 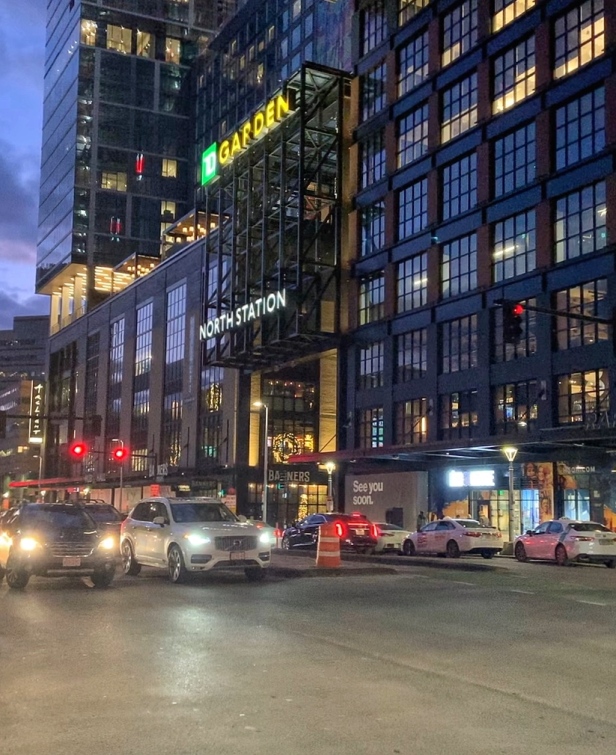 Once parked I quickly noticed that the Courtyard by Marriott is across the street from TD.  If you’re staying for a weekend and your priority is convenience over price, look no further.  There are a handful of restaurants around TD Garden including Tavern in the Square, Sullivan’s Tap and The Four’s Restaurant & Sports Bar.  Most of the previously listed had over an hour wait, so B and I ended up at the Boston Sports Grille on Canal Street.  I ordered chips and guac while B got a honey bbq melt.  Everything was good and the service was quick for how crowded they were.

After checking out the Bobby Orr statue we took the escalator up to the entrance of the arena.  Trying to get through security was a crapshoot.  Once in the arena you’ll see a row of metal detectors to your left and right and in the middle are fans trying to figure out where lines start and end.  I thought I didn’t know what I was doing because it was my first time but felt better when everyone around me was asking if there was any organization to the chaos. 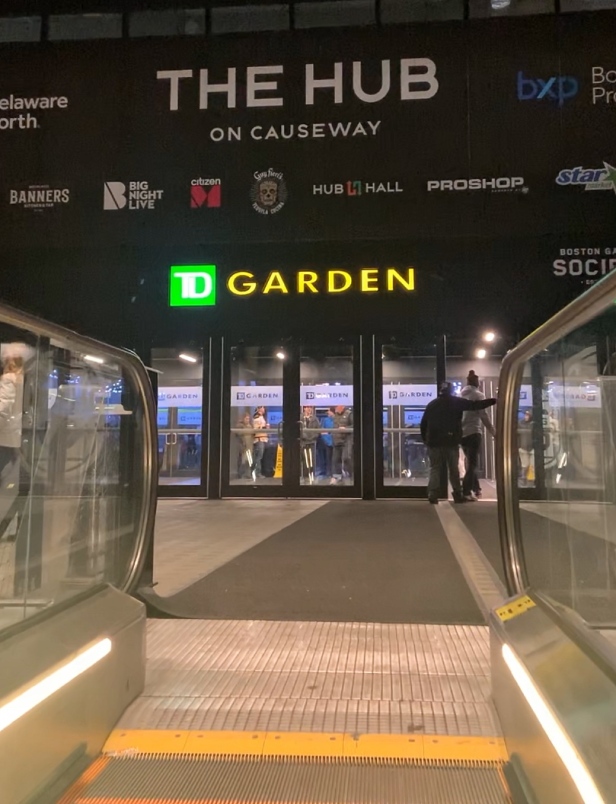 Like the reviews I read on Trip Advisor, security is top notch and thorough.  This was my first arena that I had to take my hat off at the metal detector and even thought it was inconvenient (hat hair is no joke) I really appreciate how thorough they were – you can never be too safe.  Again, I brought my clear bag from Amazon and it made things move a little quicker.

The interior of TD Garden is very generic.  When walking through the concourse I was again reminded of walking through an airport.  It was very elegant with digital advertisements playing at the entrance of each section.  Most of the walls were black and it nicely contrasted with the shimmering white floors.  Even though it wasn’t my cup of tea I can’t deny it’s not a clean arena.  I spoke to other hockey fans that traveled to Boston and they loved the arena for the same reason it wasn’t my favorite… because of its sleek general design.  It’s all a matter of opinion, but when I was walking through I couldn’t tell if I was there for a hockey game or a Justin Timberlake  concert. 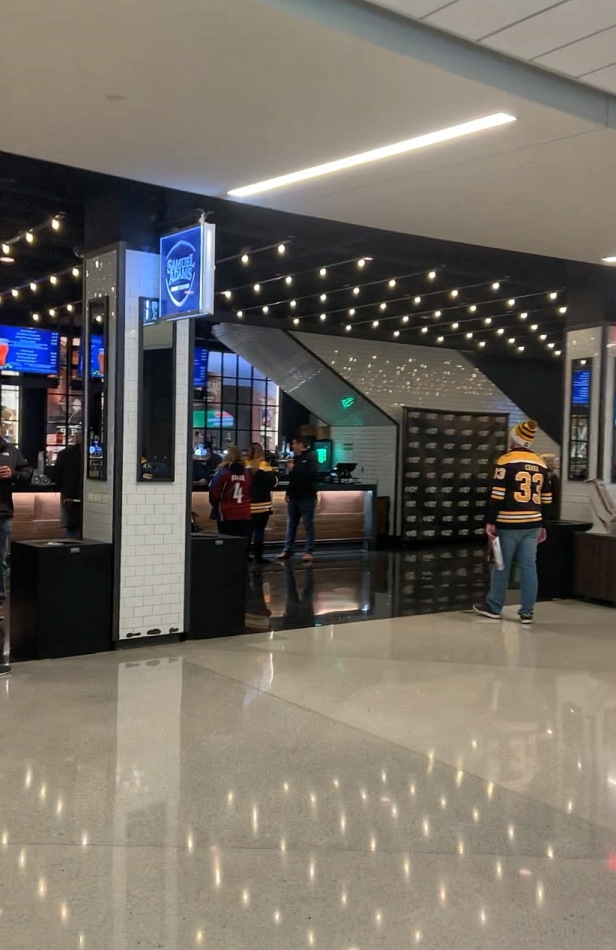 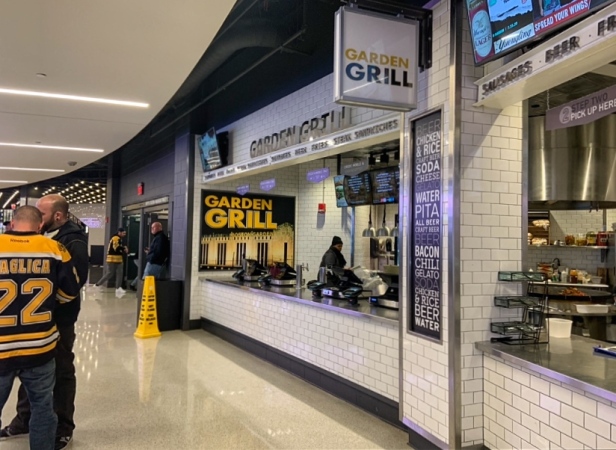 The jumbotron isn’t as jumbo as other arenas I’ve been to (I swear that’s my only joke) but it does divide the Boston Bruins banners from the Boston Celtics banners.  What I loved about the Bruins organization is the retired numbers are not banners (like New Jersey) they are the actual Bruins logo.  Well done!

The warm up music was not my preference but did hype up the crowd.  Rap echoed throughout the Garden and thankfully they mixed it with some rock classics.  The absolute highlight of the trip was hearing Carol of the Bells by Trans Siberian Orchestra for their opening montage.   They had images of snowflakes moving around the ice along with a video of the Bruins players.

What surprised me was how many Avalanche fans traveled to the arena.  Colorado fans occupied the entire row behind me.   They were all extremely pleasant to talk to and no fights broke out (which is always an added bonus).  Colorado dominated play from the first puck drop and really dictated the pace of the game.  It kept Bruins fans pretty quiet but they did manage to cheer in the first period when Chris Wagner scored at the 13:14 mark.  Unsurprisingly, the Avs beat the home team 4-1. 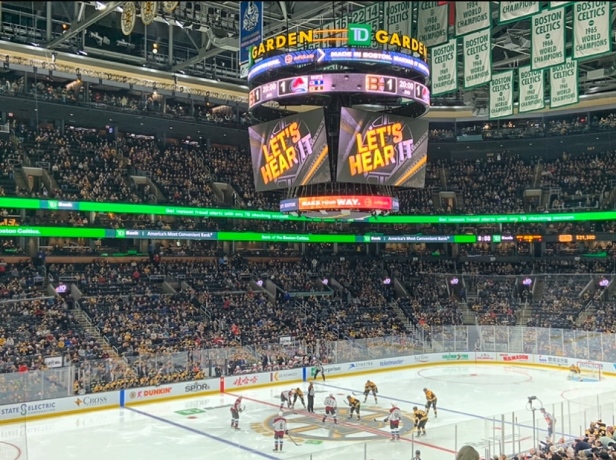 Overall I was a little underwhelmed with TD Garden.  Going to an arena of an original 6 team I thought there would be more history throughout.  Although there could have been areas of the arena that I missed I wasn’t expecting the arena to be so sleek and updated… I guess in my mind I was thinking more of the Bell Centre.   I believe it was my own expectation that left me feeling “meh” about seeing a game in Boston but by all means it was not a bad arena.  If you’re planning a trip realize it’s going to be pricey and definitely don’t try and wing the Boston roadways…  review the route before you get into the city.

This was the only arena to date that my camera was prohibited.   Thankfully my waitress at Boston Sports Grille knew the head of security at TD Garden (talk about luck) and sent him a picture of the camera and I knew before I got in line for the metal detectors.

Boston has a ton to offer and would make a great weekend getaway.  I promise you will not run out of things to do and see.

To date TD Garden is the only arena where I could not order a decaf tea.

The above photo mural of TD Garden is in one of the stairwells and would make an awesome photo for your IG account.

I am again going reiterate that Boston will end up being a costly trip but it will be worth it.  The best time of year to go would be October in the heart of Autumn. 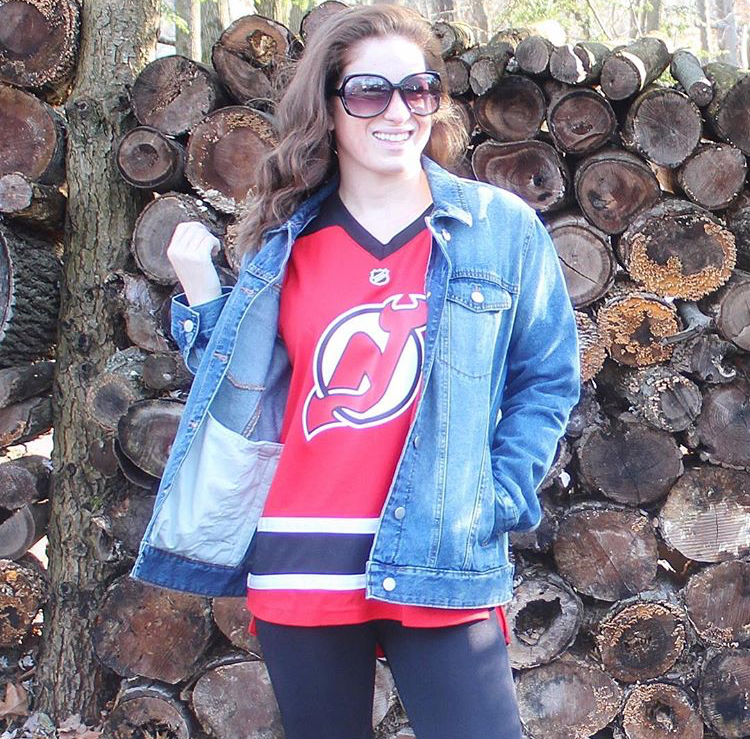 Kristy is a passionate hockey enthusiast with a desire to travel to all 31 NHL cities. Skating in Stilettos is a source for NHL arena travel guides and inspiration for all things hockey for the female fan.

Well it wasn’t a #NJDevils win but it was a great night with @adventures_of_a_jerseygirl. The @flapanthers looked sharp and showed a ton of fight -which is great for my prediction of them getting to the Eastern Conference Final 👌🏼 Additionally, I had a great hockey conversation with the always knowledgeable and stylish @erika.wachter who is an absolute gem. And as an added bonus my shirt is currently on sale at @livelovegameday for $12.00 and all sizes are currently in stock 👏🏻
𝐻𝒶𝓅𝓅𝓎 𝒮𝓊𝓅𝑒𝓇 𝐵𝑜𝓌𝓁 𝒮𝓊𝓃𝒹𝒶𝓎 🏈 Today on the website I am sharing my three favorite #HockeyPodcasts 🤗 My EarPods are constantly in and whether I’m commuting, working out or going for a walk with Milo you can guarantee I’m listening to a podcast. Click the link in my bio and let me know some of your faves below.
Added another member to the wolf pack 🐾. We will be fostering Jasper for the next few weeks and if everything goes as expected Milo is going to have another fluffy friend 🤗 Jasper was found as a stray in Texas and is adjusting very well so far. Thankfully, I already have a little @njdevils bandana.
Today was a bittersweet day. I jumped on the @drhockeypodcast and talked the NHL All-Star game with two of my favorite hockey fans - and that’s always a great time. However, Ive been feeling extremely melancholy since the Kobe news broke. Clearly I’m not a basketball fan but like the rest of the world I know the name Kobe Bryant. I’m heartbroken for his wife knowing the nightmare she is currently living and will be living for the rest of her life. Hug your loved ones a little bit tighter tonight.
It’s kind of embarrassing how happy a new planner makes me 🤗 I have used almost every type of planner under the sun and after years (𝒶𝓃𝒹 𝐼 𝓂𝑒𝒶𝓃 𝓎𝑒𝒶𝓇𝓈) I finally found a company I’m happy with. @purpletrailapp offers a variety of sizes and you can customize virtually every part of the planner. I’ll be sitting with this beauty and a decaf latte until the @njdevils drop the puck.
Sitting with my favorite Milo munchkin watching a 𝕡𝕙𝕖𝕟𝕠𝕞𝕖𝕟𝕒𝕝 Winter Classic (he actually did watch 🤣). Dallas needs to take a bow because they did a tremendous job hosting 👏🏻 It warms my heart that over 85,000 people sat in a football stadium to watch two teams play hockey below the Mason-Dixon Line. I’ll post my #WinterClassic thoughts on the website later tonight but in the meantime what did you think of the game? Anyone else happy Perry got ejected from the game 🙋🏻‍♀️